What’s This Bernie Activist to Do? (Never, Ever Lose Your Sense of Outrage) 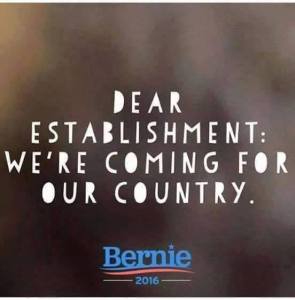 As some of you may have noticed, I’ve neglected my blog for many months now.  That’s mostly because for the first half of 2016, campaigning for Bernie Sanders consumed almost all of my spare time.

But in the weeks since the convention, I’ve had the chance to pause and reflect on this remarkable period in my life and in our nation’s history and to grapple with  my role as a Berniecrat going forward.

Many of you among my politico friends (both Bernie and Hillary supporters) have given me some grief of late–for my persistence in blasting away at Hillary Clinton, post-convention.  It’s over, many say.  Move on.  Accept the inevitable.  And my personal favorite, which I have been told just about every day since the day Bernie launched his campaign:  Grow up.  (!!)

More specifically, I’m frequently told that by continuing to highlight Mrs. Clinton’s lousy positions, like her apparent fondness for war criminal types like John Negroponte and Henry Kissinger, or her continued embrace of DNC hack Debbie Wasserman Schultz, I make  it more difficult for her to cruise to victory against bogeyman Trump.

Well, my friends, my insistent drumbeat of Clinton criticism isn’t sour grapes.  Nor is it simply bitterness or disappointment over Bernie’s “loss–”  although I concede I have those feelings in spades after busting my ass to get Bernie nominated, only to discover, in the words of Senator Harry Reid himself, that the primary “was not a fair contest.”

No, there’s a deliberate method to my madness, and an actual strategy, crude as it might be.  It’s not the strategy I would have preferred, nor is it a happy or satisfying one.  I’d much rather have something positive to argue, as I did when campaigning for Bernie, a candidate with whom hope and enthusiasm blazed bright for millions like me.    What’s left in the aftermath for me, and millions of others?

Will we door knock and phone canvass for Hillary?  (I’ve got lots of experience with that.  I’m a former union organizer and since January of this year, I have knocked on hundreds of doors in NH and NY, and made over 5,300 phone calls.)   Well, no, that isn’t going to happen.  As far as I can tell, even those Bernie supporters who decide to vote for Mrs. Clinton will barely manage to crawl into the voting booth, pull the lever for her, and crawl out before running off to shower themselves clean.  They sure won’t be out pounding the pavement for her.

And I haven’t the slightest interest in debating who Bernie supporters should vote for in November. I have no intention of trying to convince others how to vote.   We’ve got a dreadful decision to make, and each of us will have to grapple with how best to make that choice.  In the meantime, we face a hideous spectacle of a general election campaign, during which few issues important to American voters will be meaningfully discussed.  Instead, we will have to listen to ugly gender politics attacks and personal character assassination.  My prediction is that those Americans who pay even a little attention will end up with some form of PTSD by the close of the polls on election day.

Where then to focus our efforts?  How to continue the political revolution?  Some will campaign on behalf of the Green Party and Jill Stein.   Although it’s incredibly unlikely that Stein could win the election,  there are other good reasons to go Green.  Maybe, just maybe, with enough Bernie supporters flooding into the ranks of the Green party, she’ll get into the debates, onto all state ballots, and/or qualify for federal campaign funds.  That would be a major, revolutionary accomplishment itself, with potential to put a crack in the two-party corporate monopoly.

Whether we choose to support Jill Stein or not, there is still much to be done.  I badly wanted Clinton out of the picture, since  I believe that the corporate neo-liberalism she represents has been a disaster for this country.  But if stuck with her, what to do?   It’s understandably tempting to give up in despair.  As Chris Hedges and others have astutely pointed out, there’s been a corporate coup d’etat in this country, in which the monied interests have seized control of our democratic institutions and used them to their own benefit, at the expense of the 90% or so.  That coup locked itself into place during the Obama era, and a Clinton administration will only tighten the stranglehold for years to come.

In spite of that admittedly dark outlook, however, I intend to keep fighting.  And yes, Clinton is an adversary, almost as much as the GOP is.  (Maureen Dowd argues in today’s New York Times that Republicans, in seeking a GOP alternative to Trump, need look no further than Mrs. Clinton herself.  In other words, she’s Republican lite.)   As a progressive (and a lifelong Democrat) I don’t want her the slightest bit comfortable, confident, or complacent in the belief that she can take progressives for granted, either in the run-up to the general election, or after being elected.   I want her to feel cornered at every turn, to feel her feet held to the fire, and to be obsessed with worry that she’ll be a one-term president or that the left will primary her in four years.  If we couldn’t have Bernie, our best chance to break the grip of the corporate fat cats over our lives, then we can apply constant pressure to the Wall Street loyalist who gets in to office instead.

My strategy is three-pronged.  I will:  1) Give upgraded consideration to supporting a third party, Jill Stein of the Greens.  2) I will campaign actively, including phonebanking and door-knocking for down-ballot Berniecrats like Tim Canova, Zephyr Teachout, and my own Ed Clark here in Essex-Caledonia.  3) And I will stay laser-focused on Hillary’s every political move.  I’ll call her out when she moves further and further to the right, as she surely will, in the bogus name of “pragmatism.”  I’ll criticize her at the top of my lungs when she abandons any part of the Bernie-influenced platform.  I’ll yell like hell when she embraces hideous hacks like Kissinger or Condi Rice.

If we’re going to slide further into the black hole of plutocracy under Mrs. Clinton’s watch, I won’t be quiet about it.  None of us Bernie supporters should.  I’ll protest in every way I can.  That’s my strategy and I’m sticking to it.  xxoo.