Here is my mother, Altina Laura Waller, who recently made the tough decision to undergo fairly serious back surgery.  Three weeks after the operation, she’s still recovering, but yesterday she went on her first real mini-hike, for a full mile!   Very proud of her persistence and determination to get back to the active life that she loves.

We spent this holiday with my mom and her partner David and my brother Andrew and his partner Gina at our mom’s house in Connecticut.  It had been nearly two years since we’d all been together, and we had a good time cooking, eating, drinking, laughing, watching movies and generally hanging out.  Best thing of all?  Gina and I played Scrabble.  It was lovely. 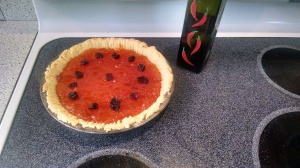 I’m fond of baking, and I’ve often wondered what it would be like to spend all my days as a professional baker.  So I scheduled a pre-holiday baking day, during which I planned to do nothing else.  I baked seven batches of different cookie varieties, a batch of scones, seven loaves of quickbread, two pies, a butternut squash soup, and two French baguettes.   I started early in the morning with twenty minutes of coordinating the timing, then jumped right in.  Everything came out well, and I had a great time baking as I listened to Ella Fitzgerald’s “It’s a Swinging Christmas.”

Our friends Irwin and Rachel invited us, on the spur of the moment, to accompany them to a Hanukkah celebration at Riverside School in Lyndonville.  We ate potato latkes, sang songs, and best of all, danced in a circle.  The synagogue arranged for two experts to come up from Montpelier and teach us the dance steps.   How often in our modern, post-capitalist world do we get to stand in a circle with people, hold hands, and dance our hearts out?

Class Distinctions: Dutch Painting in the Age of Rembrandt and Vermeer:  Museum of Fine Arts.

We spent Thanksgiving at Edward’s daughter’s house in the Boston metro area.  After the Thanksgiving festivities, we went to this stunning and intriguing show at the Boston’s Museum of Fine Arts.  The paintings were organized in different rooms by depictions of the wealthy, the professionals, the merchants and artisans, and the poor/indigent.  I’ve never seen such a smartly curated exhibit.  To learn more about the exhibit, click here. 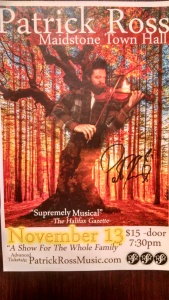 The talented local fiddler Patrick Ross came and performed at the Maidstone Town Office this fall (it’s part of his plan to perform at every single Town Office in Vermont).   The venue is just two minutes up the road from me!  This performance was so much more than a concert: instead, Mr. Ross combines music, hands-on audience demos of the instruments, and storytelling, interspersed with fascinating tidbits of local history of Essex County, where he grew up (in Canaan.)  Mr. Ross makes it clear from the get go that he wants to break down the walls between artist and audience, and that’s exactly what he did.   He is adorable and talented!  Here is a short video of him playing fiddle that night.

Rhythm and blues and gospel singer Mavis Staples came to the NEK this fall.  What a performance!  I felt myself a lucky part of history that I had the chance to see this extraordinary musician live–she seems to possess more energy at 76 than I do.  My favorite moment of the night was when she sang “Will the Circle be Unbroken.”

Local Theatre, Peter Gair and Fiddler on the Roof

My friend and former colleague Peter Gair is one of the most talented actors in the North Country.  (Those of you have phoned my Guildhall office have heard his compelling baritone voice on my answering machine, too).  He and his wife Wendy Muello Gair and their children Molly, Nora and Nathan are mainstays of the local theatre scene.  This summer, Peter performed the role of Tevya in Fiddler on the Roof at the Weathervane Theatre in Whitefield, and Peter was fabulous in the role.

The Cog Railway at Mt Washington

It’s very touristy.  Perhaps even intolerably so at times.  But still, it was something I wanted to do this year, take the historic cog railway ride up Mt Washington.  Although I’ve lived just half an hour’s drive from the mountain for over 10 years, and even worked at the Mt Washington hotel for over a year, I just never got around to it.    And it is a truly spectacular ride, even harrowing at times.

It was the early 1970s, and a brave group of young hipsters and iconoclasts, inspired to change notions about property and ownership came to Norton, Vermont.  They had come together through experiences at the Woodstock Music Festival and other communal experiments on the West Coast, and subsequently purchased 592 acres of land near the Canadian border.  The deed was held in no individual’s name, but rather by “the people.”  Anyone was allowed to come and live, and no rent was required. It was a short-lived but brave and important experiment in collective ownership and cooperation.  By the 1980s, the experiment had wound down and sadly, devolved into some criminal and drug-related activity.  Ultimately, the federal government prosecuted some of the remaining residents for marijuana cultivation and sale (oh good grief, why?  Especially now that Vermont is on the verge of legalization).  As part of that process, the land was taken by forfeiture and eventually turned over to the State of Vermont as a state forest.  This spring, we made our way up there, and walked the verdant meadows and the babbling brook that borders it, sensing the ghosts of the brave and youthful pioneers who once lived and loved there. Below is the people’s map of the property, then owned by everyone. 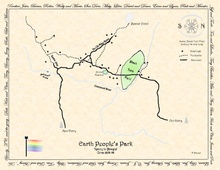 Richard Thompson, in my view, is the world’s greatest living guitarist.  And this year, he came to Vermont.  My friend Teri and I made the trek down to White River to see him in concert, and we were not disappointed in the slightest.  My only regret is that I never had the chance to see him perform with his former wife Linda Thompson.  I also consider Richard and Linda Thompson to be one of the greatest musical couples of all time. Here is a video of him performing one of my favorite Thompson tunes (not from that night, but he’s still much the same!)

My friend and colleague Connie Keresey has a condo near the Portland waterfront, and she was kind enough to offer it to my mom and I for a long weekend of visiting in Portland.  We had a great time exploring the city.  The best moments were the hours we spent at the Portland Museum of Art, which I think is one of my favorite museums anywhere.  It’s so intimate and accessible!  At the time, there was a nice exhibit of paintings drawn from a wide variety of Maine museums, including this Andrew Wyeth (Turkey Pond) from the Farnsworth.

In an event that is now famous nationwide, Bernie kicked off his presidential campaign at a May rally on the shores of Lake Champlain, in Burlington, Vermont.  My friends Teri and Jacquie and I made a road trip to Burlington for the rally.   It was an exciting event all around, and we followed it up with a lovely few hours hanging out, discussing politics and drinking at Ri-Ra’s in Burlington, my favorite Vermont Irish pub.  (As most of my friends know, I’m a passionate Bernie Sanders supporter.  Campaigning for him has consumed a fair amount of my time since that day in Burlington, and soon of course, things will get busier, as I start campaigning across the border in NH).

You can now take cruise ship right from the Newport waterfront.  I’d been meaning to do this for awhile, and this summer we finally did!  There are lunch, brunch, and dinner cruises, in addition to just regular two hour cruises with a guide who provides an informative tour of the Lake’s history and geography.  We drank margaritas as we circumnavigated the Lake, thinking about Rogers’ Rangers.  We even crossed the border into Canada briefly, without passports. 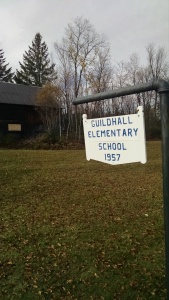 Our town’s population is in decline, as is our population of children.  Our school budget over the last decade has been skyrocketing, topping off this year at over $800,000, all for a two room school that serves 21 kids, plus about 12 older kids who attend middle and high school in other districts.  That’s not sustainable.  The Vermont legislature knows it’s not and for years has been gently pressuring school districts to consolidate or close schools.  This year, we finally reached critical mass here in little Guildhall.  The School Board, seeing the writing on the wall, called a special meeting for the voters to decide whether the school should remain open or close. An overwhelming majority voted to close, but no one was very happy about it.  The doors of our little school with its fabulous teachers will close in June 2016.  For the first time in the Town’s 200 year-plus history, we will have not a single school within our borders.

I took up the violin as an adult many years ago, when  I lived in Boston. But despite my good intentions, violin music took a back seat after moving to Vermont.  I was busy with work and then with law study and law practice.  Plus, despite repeated efforts to find a violin teacher within a reasonable distance, I couldn’t find one.  Finally, last year at about this time, thanks to our friend Irwin Gelber (a concert pianist), I found the best teacher I could imagine: Alvin Shulman of Lyndonville.  He is smart, witty, patient, and a great mentor and musician.  Every week, I trek to his house for a violin lesson and I am immensely grateful for his presence in my life.  Above is one of the pieces I’m working on right now, by Telemann.

Happy New Year, to all my friends, colleagues, and loved ones, far and near!