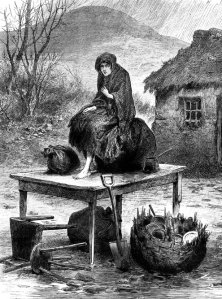 I begin this post of things Irish with this image and a link to a remarkable Op Ed piece from this morning’s  New York Times entitled “Paul Ryan’s Irish Amnesia,” written by Timothy Egan.

Read this important and timely article here, which explores the hypocrisy of Paul Ryan in connection with his ancestral links to the brutal poverty of the Irish famine. During the potato famine of the 19th century, British lawmakers and policy makers characterized the suffering Irish as undeserving and unworthy of assistance. Today, in a United States increasingly marked by low wage work, lack of health insurance, and outright debilitating poverty, Paul Ryan takes a similar position toward less fortunate than himself.  (I consider Paul Ryan and his ilk to be a shame and blight on their party).

(The hypocritical demonization of the poor is all over–we see it in Paul Ryan, and we see it in the alarming statistics which show that Tea Partiers tend to rely to a greater extent than others on government entitlement programs.  But this hypocrisy rears its head in more local, unexpected ways, too.   Essex County, Vermont, where I live, is the poorest county in Vermont.  It has the highest rate of people on some form of welfare or government program than any Vermont county.  Yet it’s also where people mostly vote Republican, and a district where people have sent Republicans–mostly opposed to all forms of welfare–to represent them in the Vermont legislature, year after year and decade after decade.   And sadly, where it is all too common to hear some people rail against their neighbors for “getting hand-outs” while the same person is perfectly willing to accept federal commodity subsidies for their dairy farms, or tax breaks for their farmland, or various other forms of state assistance.    It can be disheartening.  But maybe–just maybe–the likes of Paul Ryan, and the memory of the Irish suffering, can change this and we can start to take care of one another, rather than be divided.)

Here is the cover to the book cited repeatedly in this important article, “The Great Hunger,” by Cecil Woodham-Smith. We own this book and I have read it many times. I consider it required reading for anyone seeking to understand the political economy of Ireland in the 19th century.

But of course, we know that the Irish were far from just victims. Through the course of Ireland’s occupation by the British, the Irish have persistently fought back, paying with their lives for the goal of national sovereignty. In 1916, a small group of relatively unknown (and unpopular) patriots proclaimed Ireland to be a free republic. (Click on the image below–Poblacht Na H Eirann– to enlarge.  It’s worth reading the text, which is downright inspiring.) 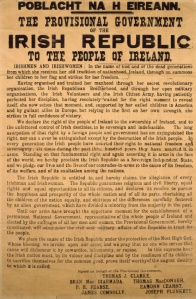 From The National Library of Ireland’s current exhibit on the Easter Uprising:

“On Easter Monday, 24 April 1916, at a time when Ireland was an integral part of the United Kingdom of Great Britain and Ireland, seven Irishmaen proclaimed the establishment of the Irish Republic, nominating themselves as its provisional government.  Together with 1,600 poorly armed followers, they occupied a number of prominent buildings near the centre of Dublin, the General Post Office in Sackville Street (now O’Connell Street) being designated as headquarters.  The government of Great Britain and Ireland regarded the insurrection as treason, all the more so as it came in a critical phase of the war then being waged with Germany and her allies.

The response was immediate and decisive, the outcome being a foregone conclusion: by the following Sunday close to 2,000 people–mostly civilians–had been killed or injured, the General Post Office and various other buildings were in ruins, and the insurgents had surrendered.  The seven signatories of the Proclamation and eight others were tried by courts-martial and executed by firing squad.  A sixteenth man, Roger Casement, was tried in open court in London and hanged in Pentonville Prison.

The insurgents had no electoral mandate.  The insurrection was viewed by many as foolhardy in the extreme and downright criminal.  Nevertheless, within two years opinion had shifted dramatically: a substantial sector of the nationalist electorate now pledged allegiance to the Irish Republic and honoured the Proclamation as virtually constituting the national constitution.”

Read more about the history of the Easter Uprising at the National Library of Ireland’s website.

And here is the quintessential Irish rebel tune, one that never fails to give me the shivers. By the Wolfe Tones.