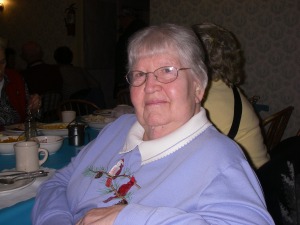 This is Marion Elsie Hodge Klinefelter, who passed away last week, on March 6. The photo was taken some time during 2009, at either the Hunters’ Supper or Mother’s Day Brunch at the Guild Hall. I remember being surprised and happy to see Marion because she had been sick and confined to her home for some time. But she looked well that night and told me how much better she was feeling. When I asked if I could take her picture, she smiled and said “of course!”

Marion’s roots in Guildhall ran deeper than almost anyone here. Her grandfather Ida Hodge fought in the Civil War and then lived in a home in Guildhall, a place I regularly pass on my daily runs.

Both Marion and her husband John Klinefelter had special places in my heart. They were an extraordinary couple, intelligent, witty, adventurous, open and forthcoming. On one occasion during our first year in Guildhall, Edward and I went biking on some dirt paths by the Connecticut River. We ended up stuck in tall grass, not exactly sure of our location, and under siege by mosquitos. We headed toward Rt 102 hand pushing our bikes through nearly impassable brush, and came out behind a house. We hesitated, not wanting to trespass on a stranger’s property, but knowing no other way back to the road. Then we saw a man waving to us cheerfully from his back porch. He called us over, sat us down on his back porch, called Marion out, and insisted on serving us ice tea. That was our first encounter with John Klinefelter, or, as I came to call him, “Uncle John” and Marion.

The Klinefelters were an important part of our lives those first years in Guildhall. They went out of their way to make us feel welcome. During my first year as Town Clerk, I had occasion to work often with John Klinefelter, who was a Guildhall Justice of the Peace. I look back fondly on the many afternoons I spent sitting with the Klinefelters in their living room talking about Guildhall history, election results, local politics, and lots of other interesting matters. When I decided to run for Town Treasurer in 2007, John and Marion were among my strongest supporters, campaigning tirelessly for me and giving me encouragement and advice as I undertook a new and unfamiliar job.

Marion was an endless source of fascinating local history. I will never forget the day that she and Uncle John came to our home in Guildhall (known as the Benton Cottage) and we sat on the porch drinking wine. As the shadows lengthened outside, Marion told us how in her late teens, she had worked for the Benton family, and therefore spent lots of time in our home. She then proceeded to give us a little mini-history of every single room in the house, with anecdotes about how each room had been used. It was a great day.