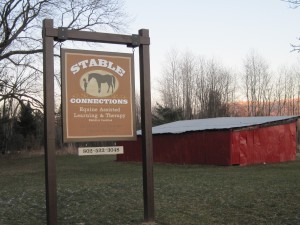 It’s big news when any business endeavor comes to this rural part of Vermont. After all, most residents are hungry for economic development, jobs and the increased revenue that can accompany a viable business. In this economically depressed area, one recent and promising development is Stable Connections. It’s a fledgling equine therapy program now located just south of the Klinefelter property on Route 102. Founder and manager Karen Guile is building this intriguing business slowly, steadily and modestly. She already has numerous concrete accomplishments under her belt. Stable Connections has land, approved zoning permits on file at the Town Office, a newly constructed barn-office, four beautiful horses, clients, private grant money from the Tillotson Foundation for program expenses, working solar panels, and much more in the pipeline. Her business is in the baby stages, but it’s for real.

Stable Connections. It’s a catchy, clever play on words and ideas, invoking the role that horses can play in fostering self-confidence, stability and balance in human lives. Stable Connections is the only EAGALA-certified equine therapy program in Vermont and New Hampshire, a groundbreaking endeavor in itself.

I confess when I first learned of the plans for an equine therapy program, I was somewhat skeptical, wondering how such a business/program could be viable in these rural parts. Worthy as the program is, surely a better place for it might be the outskirts of Brattleboro, Montpelier or Burlington?
But although Stable Connections is still new and has yet to prove its full economic chops, I’m now cautiously optimistic that it will prosper and benefit our region.

Last summer, Stable Connections hosted its Grand Opening, garnered some decent publicity and is slowly but steadily building a client base and revenue stream. Clients range from private autistic youth to social workers and guidance counselors, and groups of at-risk youth. Guile has longer term plans for couples counseling, corporate and non-profit team-building retreats, and training for other human service professionals. She’s also in the process of negotiating a contract with the court diversion program for Caledonia, Essex and Orleans counties, whereby first-time non-violent and youthful offenders can fulfill their counseling and community service requirements at Stable Connections.

It’s an exciting and innovative program, a great example of using some of the resources of the working landscape to diversify the local economy and give back. When asked how she thinks Stable Connections will contribute or enrich the community, Guile is honest and realistic. Although it will be a while before her business will generate jobs, Guile believes that Stable Connections has the potential to generate significant ancillary revenue. For example, she foresees hosting increasingly large groups at the facility, which can in turn lead to increased revenue for local restaurants, hotels and even limousine services.

Stable Connections has its origins in a dream held and patiently nurtured over time by Karen (Peaslee) Guile. Karen is the oldest daughter of Bert Peaslee, the now-legendary town official and proprietor of Peaslee’s Vermont Potatoes. Although Mr. Peaslee died of pancreatic cancer in 1999, he is still well-known and fondly remembered in much of Essex County and neighboring New Hampshire. Karen, one of four surviving Peaslee children, was reportedly the kid who loved horses. From the age of 5 or 6, she recalls, she adored horses and truth be told, was a little obsessed with them. As she grew into adulthood, she saw in them the potential for companionship and healing. Early on, as she describes it, she knew her fate and future were linked to these animals she loved best.

It took Karen a while to be ready to launch her dream. Education, work, marriage and her son all demanded her time and attention. But by 2009, she began marshalling her resources. She has an associate’s degree in physical therapy, studied special education and psychology at Lyndon State College, and has worked in hospitals, volunteered as an EMT-B and owned/ managed various businesses. With this background, she began and successfully completed the training to become a certified equine therapy instructor. For more information about EAGALA-certified programs and instructors, visit this website.

Both sentimental and practical reasons brought Karen back to Guildhall to launch her project. Her mom (Representative Janice Peaslee), her sister Barbara, and the family farm where she’d grown up, were all here. And in very practical terms, she had a small piece of land waiting for her in Guildhall, well-suited to her plan. Her dad Bert Peaslee had long intended each of his four surviving children to have a share of the Peaslee land holdings. “He wanted all of us to have a portion of the land as our legacy and heritage,” says Karen. Bert’s widow Janice Peaslee and Sharon Peaslee DeCicco, (one of Karen’s younger sisters) confirm that the 140 acre parcel known as the old Deering Meadow, had long been intended for Karen, just as other parcels scattered across Guildhall and Maidstone were intended for other siblings.

The parcel of land on which Stable Connections now sits continues to function as a working part of Peaslee farm operations, except that a 4-5 acre portion of it has been taken out of current use and is devoted to Stable Connections’ barn and horse training area. This enables the lion’s share of the parcel to continue being farmed and managed the way it has for generations.

Karen wouldn’t have it any other way. During numerous interviews, she made it clear that her first priority is the health and economic viability of the farm—hence her decision to carefully limit the scope of Stable Connections’ development on this parcel.

Her first order of business was to construct a barn-stable. After generating a business plan, demonstrating evidence of her own capital investment in the project, and undergoing a grueling application process, she secured financing for barn construction from the Vermont Agricultural Credit Corporation and North Country Investment Corporation, non-profit lending agencies.

One particularly notable dimension of Stable Connections is its business model. Karen has chosen to proceed modestly. Her dreams may be grand, but there’s nothing grandiose or naïve about the execution. In short, she hasn’t bit off more than she can chew. Thanks to her loan financing, the horse stables are complete, as is the indoor plumbing and a small office on the ground floor. The upstairs, intended as more habitable living and program quarters, remains partially unfinished, until Karen can generate more clients and more capital.  She works three days a week in a separate job to bring in a steady income. She’s taking it slowly and operating within her means. Her goal is to keep a tight lid on expenses and debt while she grows—slowly.

On a cold but sunny and bright day in December, I conducted one of several visits to Stable Connections, this time with a list of hard questions and my camera. That day, while Karen and I talked about the origins and evolution of the program, 15 year old client Sabrina was out brushing, feeding and watering the program’s four beautiful horses, Lovey, Daisy, Dream and Thunder. When finished taking the last of the horses out to the therapy area, Sabrina came in to talk. Sabrina is autistic, and Karen had warned me that she could quickly become shy and extremely withdrawn if she felt uncomfortable. Yet on this occasion, Sabrina was attentive, personable and responsive. She’s clearly a bright kid who takes considerable pride in the fact that Karen entrusts her with the care of the horses. She talked at length about her long history with and affection for animals, how she feels she’s changed since starting the program at Stable Connections, and many other topics. For a teenager who came to the program not wanting to converse, and with her hair hanging in her eyes—as Karen reports– this young woman is a remarkable testament to equine therapy and the patient, persistent model that Karen Guile employs. (Equine-assisted psychotherapy’s team approach has led Guile to collaborate with Amber Bennett, a clinical social worker at Northeast Kingdom Human Services. The association with Bennett functions to properly assess and develop therapeutic strategies for kids like Sabrina) 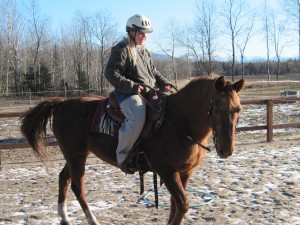 Later, out in the therapy area, I observed, snapped photos and asked questions as Karen worked with Sabrina and the horses. “Contrary to popular belief, equine-assisted psychotherapy and learning isn’t about riding,” Karen pointed out. Rather, it’s about using the horses as part of the treatment team; it engages the client in finding solutions to their problems by using carefully selected ground activities. It also helps develop social skills and self-confidence through interaction with the horses. All sessions are individually tailored—by Guile and Bennett—to the needs and goals of each client. (It can also be about emotional problem-solving. Karen tells a frankly moving story about how a horse, on one particularly difficult day, had helped her get through the sadness and turmoil of her father’s death.)

The day I was there, Sabrina was, in addition to caring for the horses, getting a therapeutic riding lesson. When she got up on the horse, it was obviously less about managing the horse, than managing herself. For example, Karen repeatedly called out instructions to Sabrina, not the typical ones you might hear from a riding instructor, but rather simple tasks like “hold out your arms to the side.” “Look up at the sky.” “Put your palms forward.” “Eyes forward, always look ahead” The instructions given were clearly designed to help Sabrina find a sense of balance and confidence.

Karen and Sabrina both, while we led the horses back into the barn, recounted how when Sabrina first started at Stable Connections, she frequently said “it’s hard,” or “it’s too hard.”

In response, Karen has persisted in telling Sabrina, time and after time, that it’s okay to admit something is hard. But the next sentence, Karen insists, has to be: “but I can do it.” That could be the motto of Karen Guile and Stable Connections, as she returns to Guildhall and builds a dream. It’s hard, but you can do it.