At this year’s Town Meeting, we probably won’t have quite the same divisive feelings, passion, publicity and fireworks that marked last year’s meeting. But some of the same issues and concerns simmer not far beneath the surface. Funding for the Guildhall Public Library is still a sensitive spot. You might remember the bitter battle last year between Article 13 and Article 14. We Article 13ers wanted, in exchange for our tax dollars, a Library that was open more hours and to see a basic financial statement each year. (FYI: in Guildhall, the Library is not owned or controlled by the Town). The Article 14ers, including the Library Trustees themselves, wanted to keep getting taxpayer money, but didn’t want to be told what to do. They said they didn’t want to be open more hours, didn’t want to produce a financial statement, and amazingly, were against any increase in funding–in short, they didn’t want any accountability. Sadly, we lost the floor vote.

But things are not always what they seem. That summer, an article appeared in the local newspaper announcing that the Library was expanding its hours from 3 to 9! They organized a book club. Two events were held, including a slide show by local wildlife photographer Roger Irwin and a presentation by a local physician about his travels in New Zealand. Both were well-attended. I realized that although we had lost the vote that night, we had actually won. It’s a great example of how power and politics work in unexpected ways. The Article #13 campaign had put the Library on notice that they couldn’t take the taxpayers of Guildhall for granted. And so for the first time in over 25 years, they made changes. 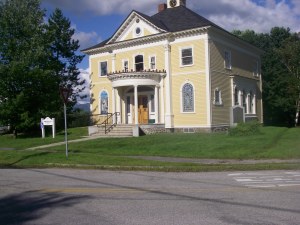 That’s why, at this year’s budget meeting, I and others argued for keeping the Library funding on the Town warning, rather than just burying it back into budgeted appropriations. As long as that Library funding is named specifically on the Town Meeting warning, the Trustees know that they have to work for their money. Funny how change comes about, isn’t it?

At this year’s meeting, expect people to be asking the Library hard questions, such as: do you plan to continue the expanded hours? What happened to the Saturday hours? (those were instituted last summer but have vanished this winter) What events are you planning? Also on the warning is an article that would require all independent organizations that receive town money to produce a financial statement as a condition of receiving those funds. If that passes, the Library will have to produce that document–like it or not– or risk their funding.

Other drama? The only contested race is the one that’s just now heating up: for Town Auditor! It’s George Blakeslee, whom I support enthusiastically, vs. Dawn Rogers.